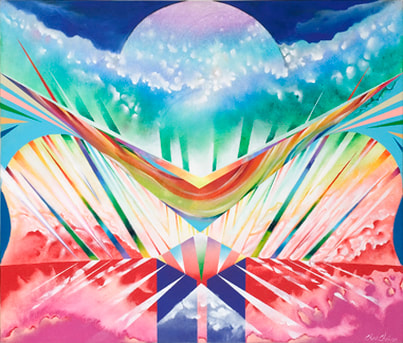 Primal Prayer was written in a creative frenzy, day and night over of a few months. It was an outpouring of my life, warts and all. It was a time when having almost died from a sudden bowel obstruction, then quickly and miraculously recovering, I decided to call myself Phynix as in 'Phoenix.' The name didn't last long, but the sense of the miracle of the whole experience has.

Musically, it spans my interior landscape starting with European classical tradition, and ending with the blues, though not a one pure in form. I love to mix and match.

I do not write long pieces with many musical concepts that are then developed, but rather simple concepts that become complex as a result of layering. I might only hear 16 bars of something, but I am always ultimately challenged to simplify what I hear in those 16 bars.

My producer, John Herberman, who is a fine symphonic composer, took on the challenge to re-record what I actually heard and had prerecorded. Most producers would have thrown up their hands, screaming 'mud'. I am deeply grateful for his courage and exquisite touch. And boy, did I learn a lot sitting beside him at the mixing board and in the editing program. Thank you, John.
Links to Lyrics
Beverly Glenn-Copeland
Primal Prayer | ORG Music

"A reissue of Canadian/American composer, player and transgender activist Beverly Glenn-Copeland’s adventurous and future-leaning 2004 folk-jazz concept-like album about the power of happiness and fullfilment. Originally issued under the name of Phynix, the 10-track recording mixes electronic soundscapes, operatic vocals, neoclassical art song and some staggeringly beautiful choral arranging into something unlike anything else. Highlights include the echoing percussion of On the Road and Afro-fusion soul sermon that is In The Image."